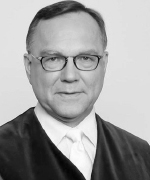 Judge Mellinghoff is the President of the German Section of the International Commission of Jurists. He is the recipient of an Honorary Doctorate from the Ernst-Moritz-Arndt University of Greifswald, and is an Honorary Professor at the Eberhard Karis University of Tubingen.