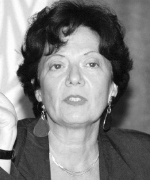 Prior to becoming a member of the Judicial Integrity Group, the Hon. Christine Chanet participated in the Round Table Conference held at the Peace Palace at The Hague in November 2001 at which the Bangalore Principles of Judicial Conduct were finalized. Thereafter, she represented the UN Human Rights Committee (of which she was chairperson) and participated at the meeting in Vienna in March 2007 of the Intergovernmental Group of Experts, convened at the request of ECOSOC, that examined and agreed upon the text of the Commentary on the Bangalore Principles.

Christine Chanet holds a Laureate of the Faculty of Law and Economics in Paris and two advanced diplomas in private law and criminology. She held several positions in government, including Junior Magistrate at the Ecole Nationale de la Magistrature (1968); Magistrate at the Central Administration of the French Ministry of Justice (1970); Technical Adviser, and subsequently Special Assistant at the Secretariat of State for Women's Affairs (1974); Special Assistant at the Secretariat of State for Culture (1976); Special Assistant in the Legal Affairs Directorate at the French Ministry of External Relations (1981); Head of International Civil and Criminal Affairs and Human Rights Department at the French Ministry of Foreign Affairs (1983); Technical Adviser in the Office of the French Minister of Justice (1988); and Advocate-General at the Court of Appeal (1992-1996). She has been a Counsellor of the Court of Cassation of France since 1996, and is the Section President and Dean of the Criminal Division.

Judge Chanet is the Chairperson of the Committee in charge of reviewing criminal law decisions following the delivery of judgments of the European Court of Human Rights, and a Member of the French National Consultative Commission on Human Rights. She is a Chevalier of the Legion of Honour and the National Order of Merit.